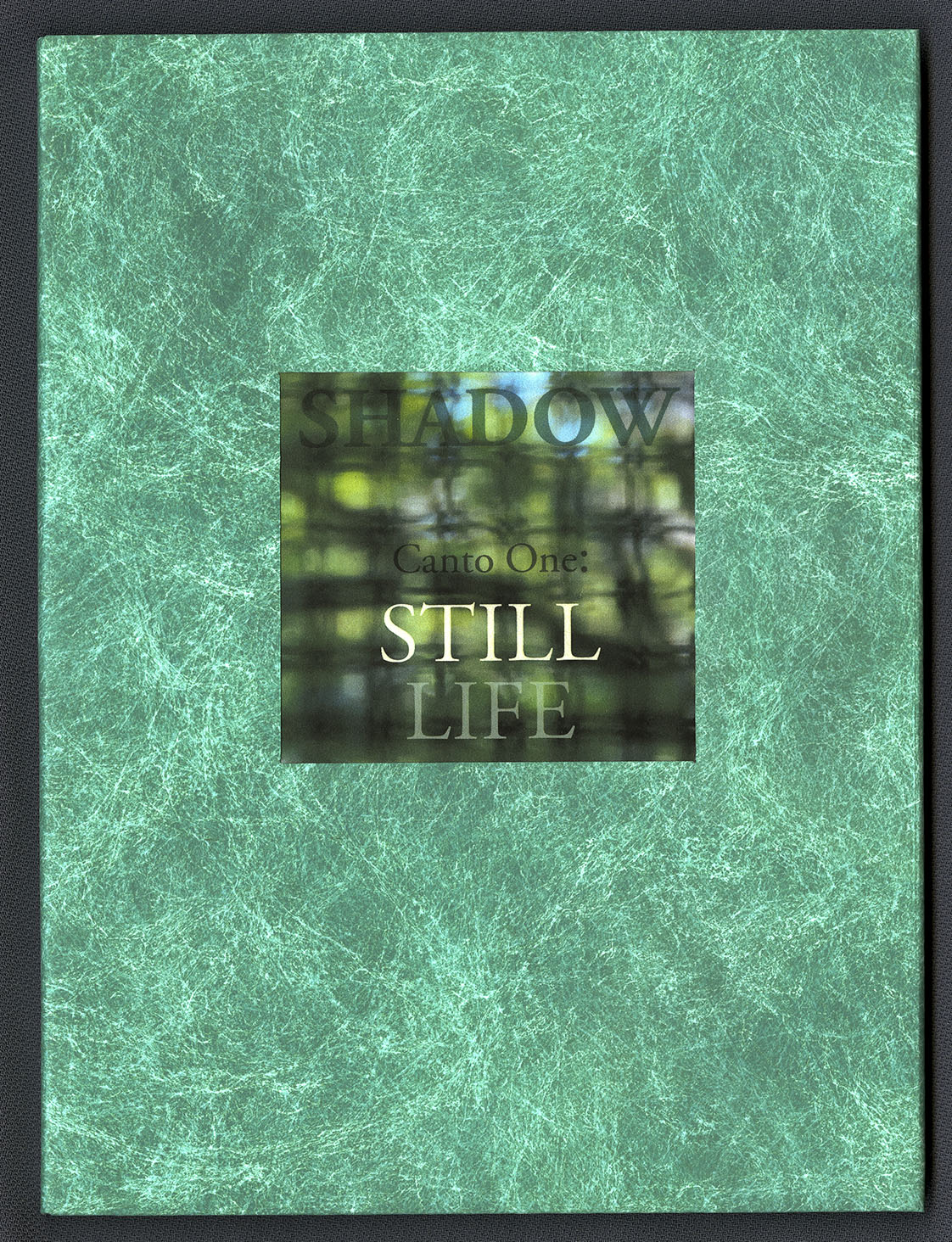 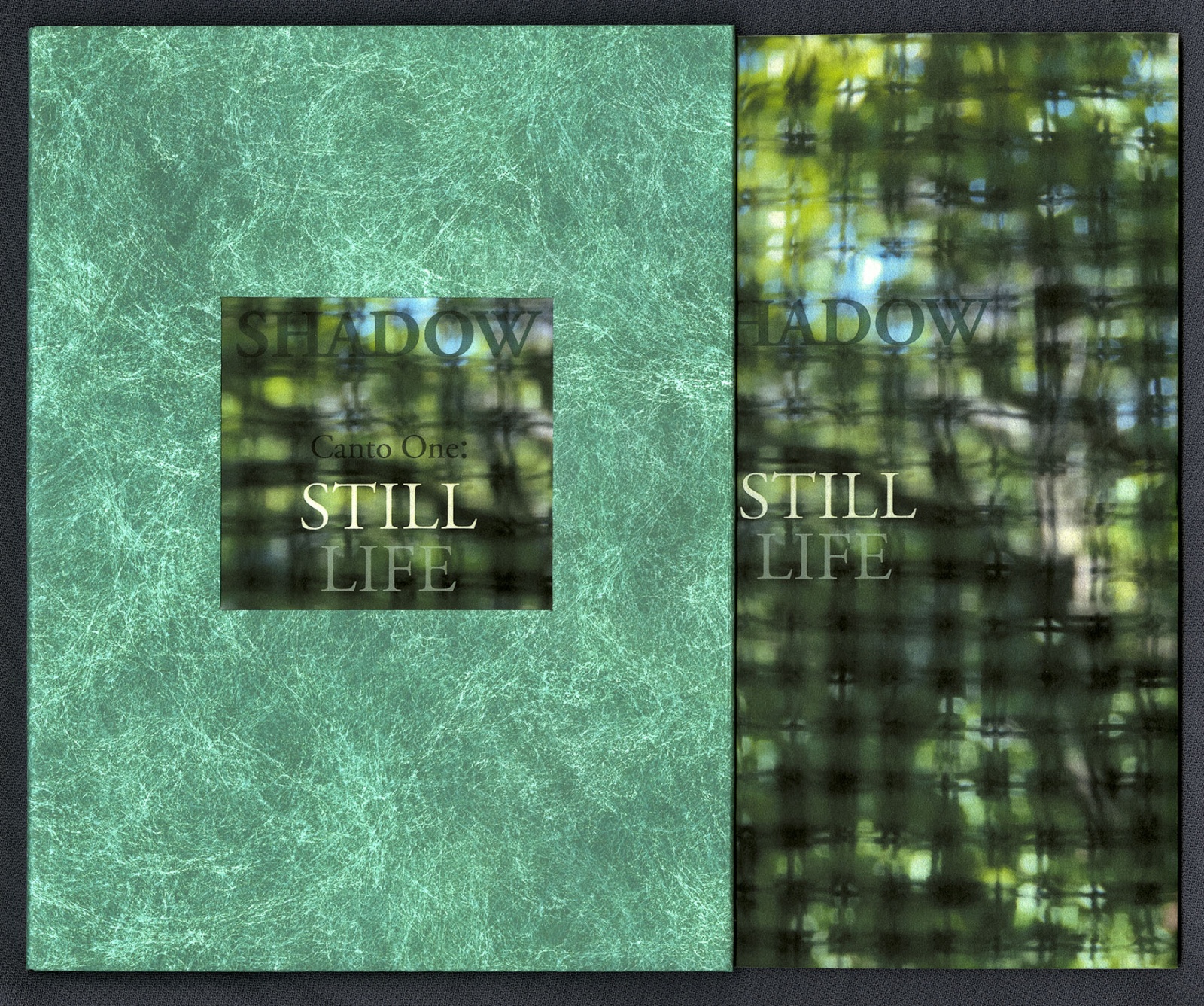 Shadow Canto One: Still Life, detail of slipcase and cover of book, slipcase constructed of stained Tyvek wrapped around eterno board. 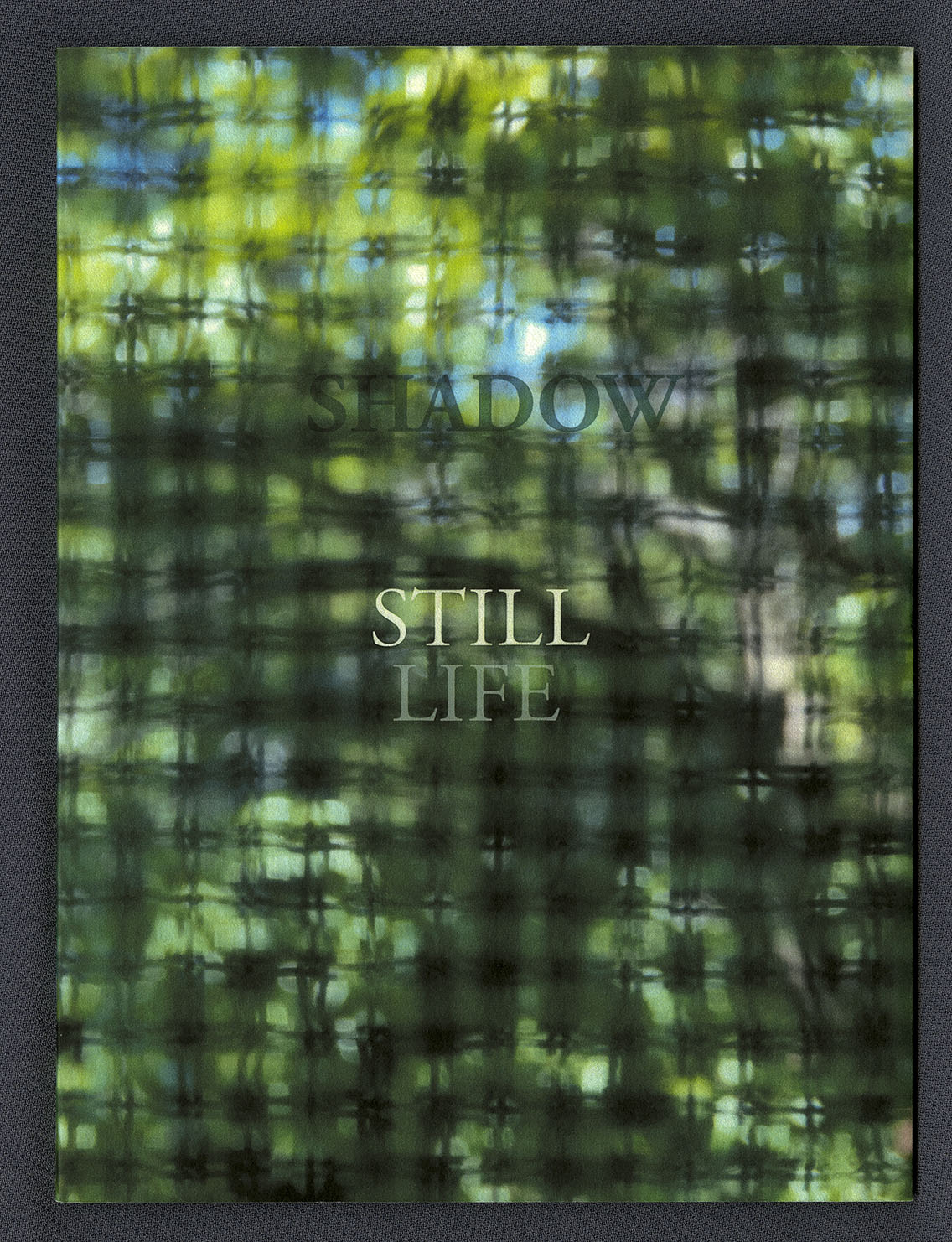 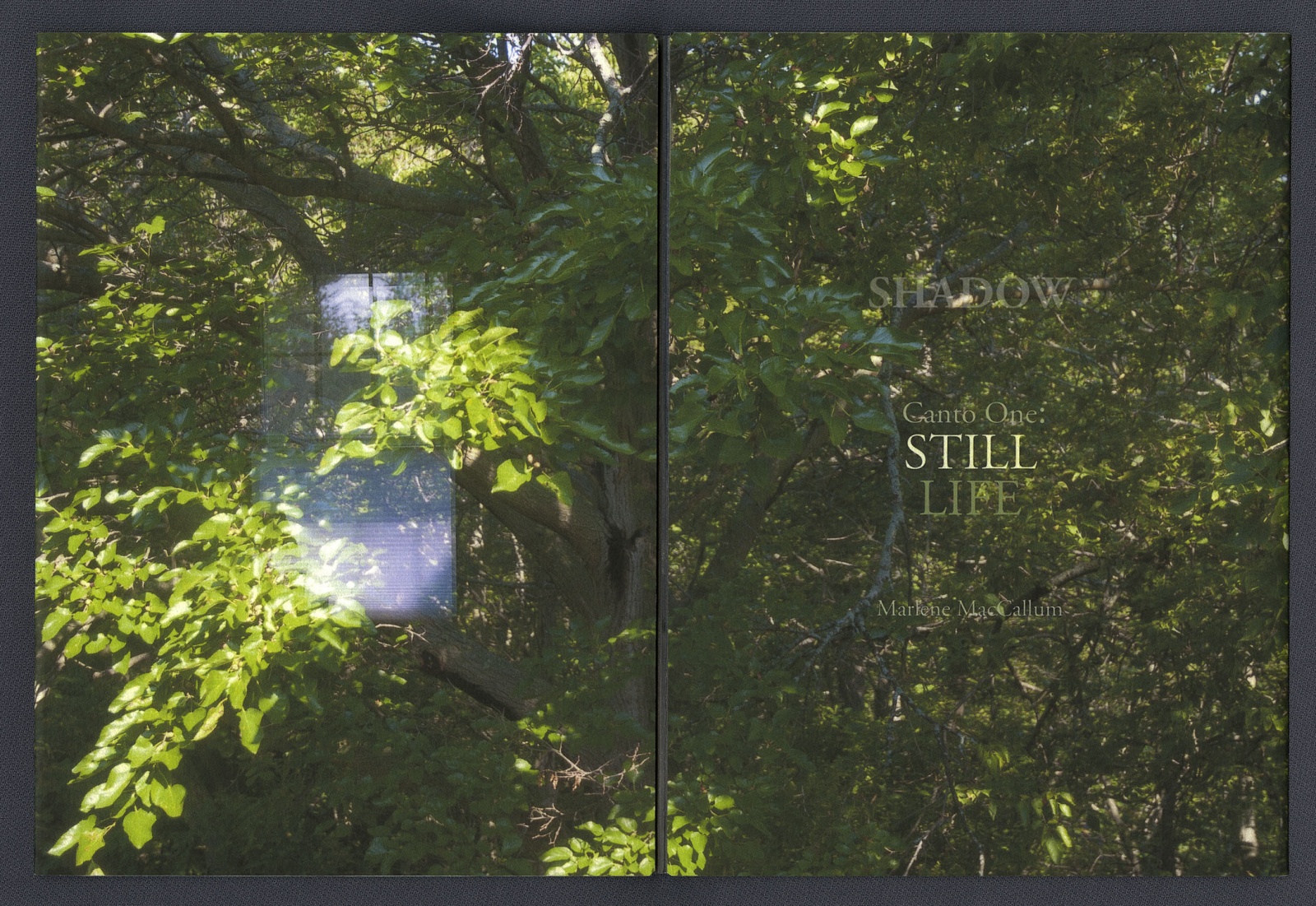 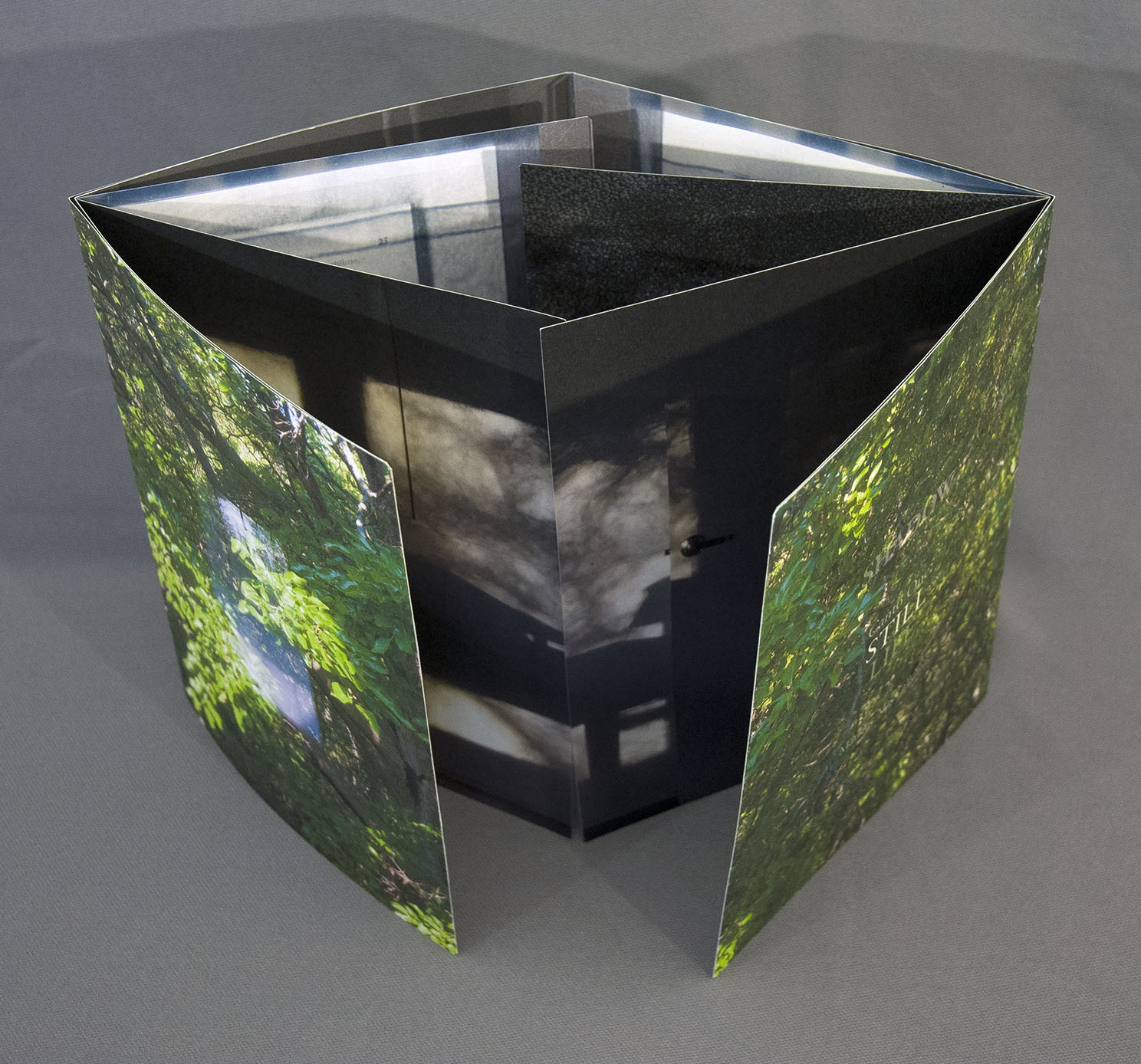 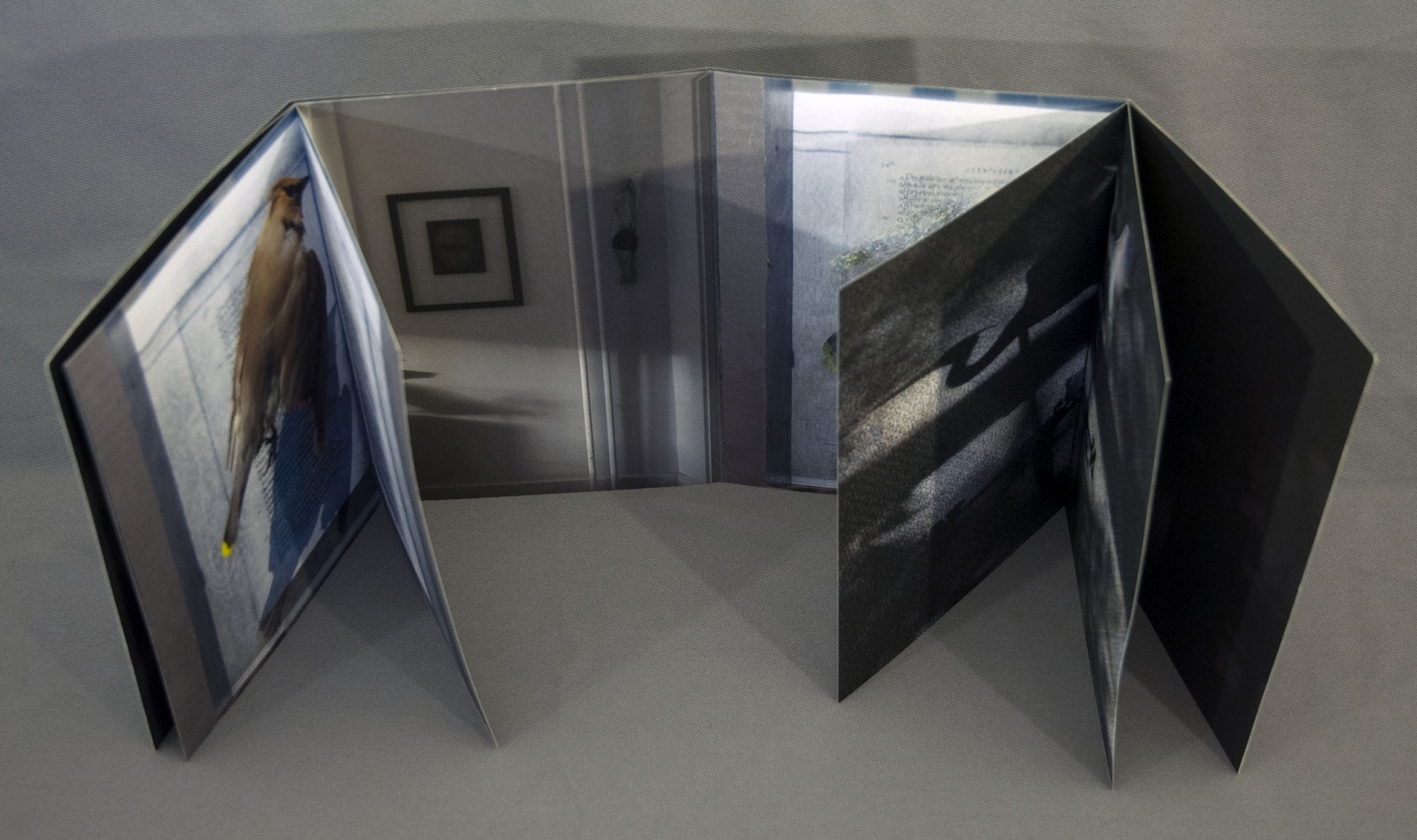 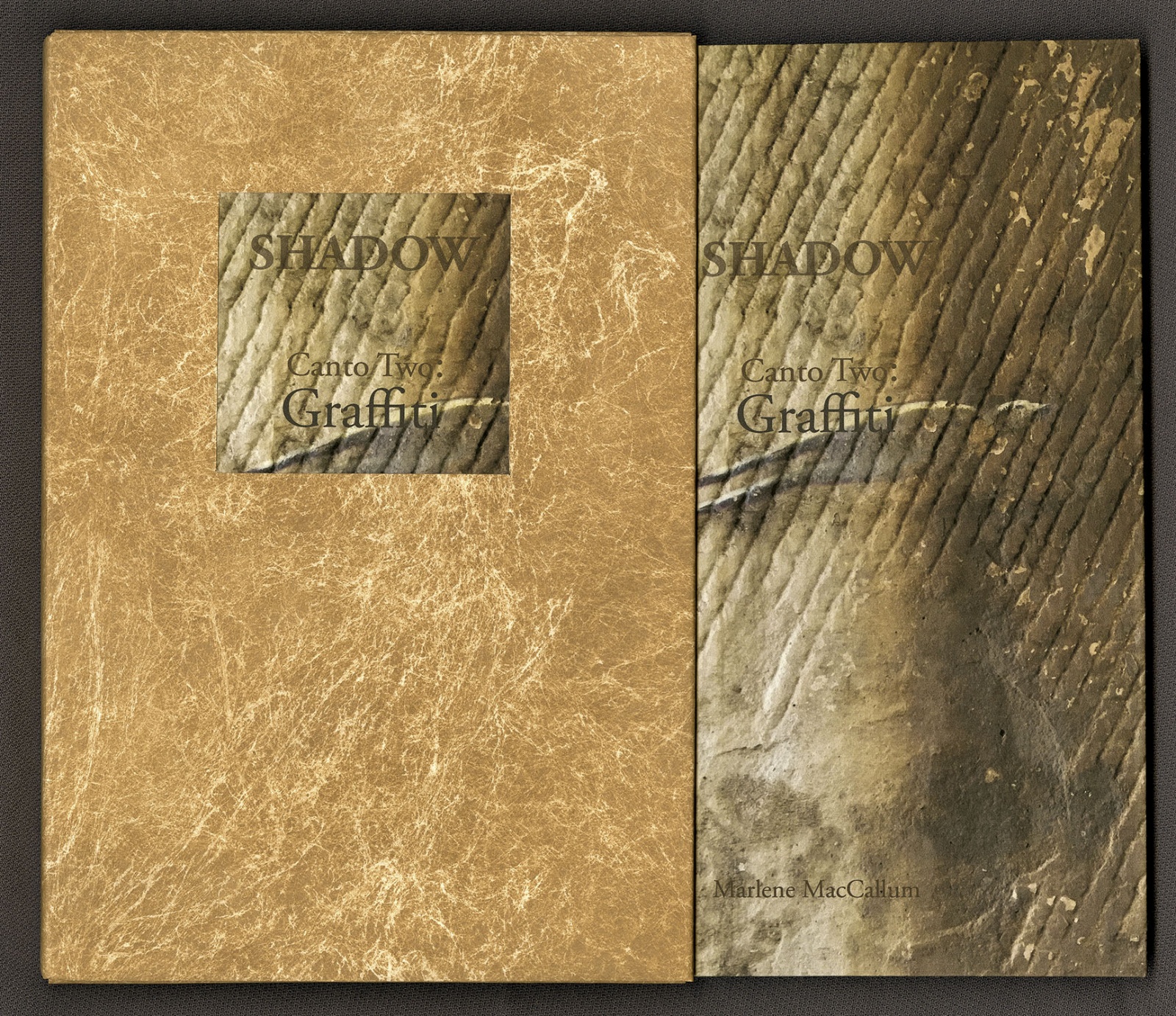 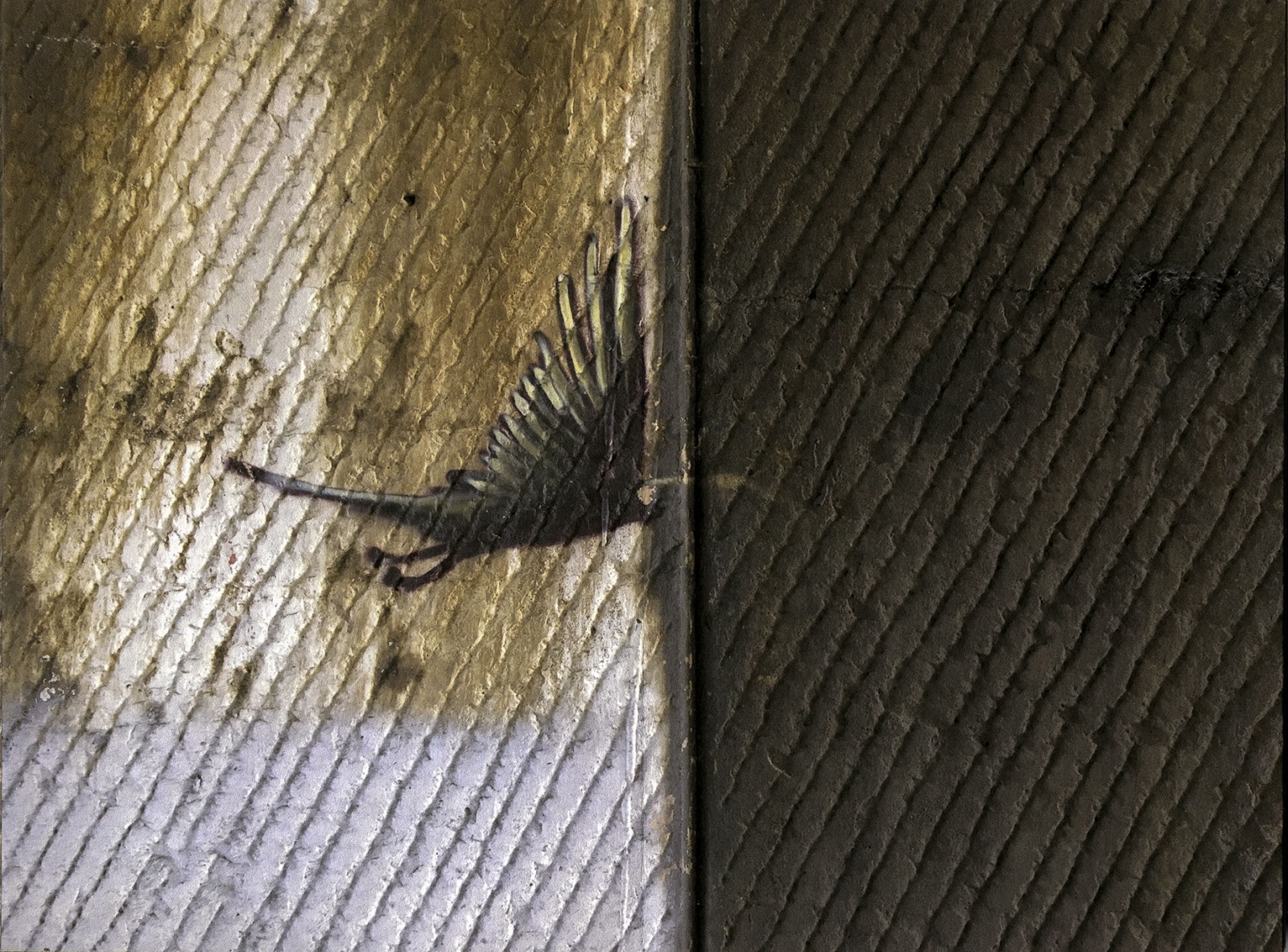 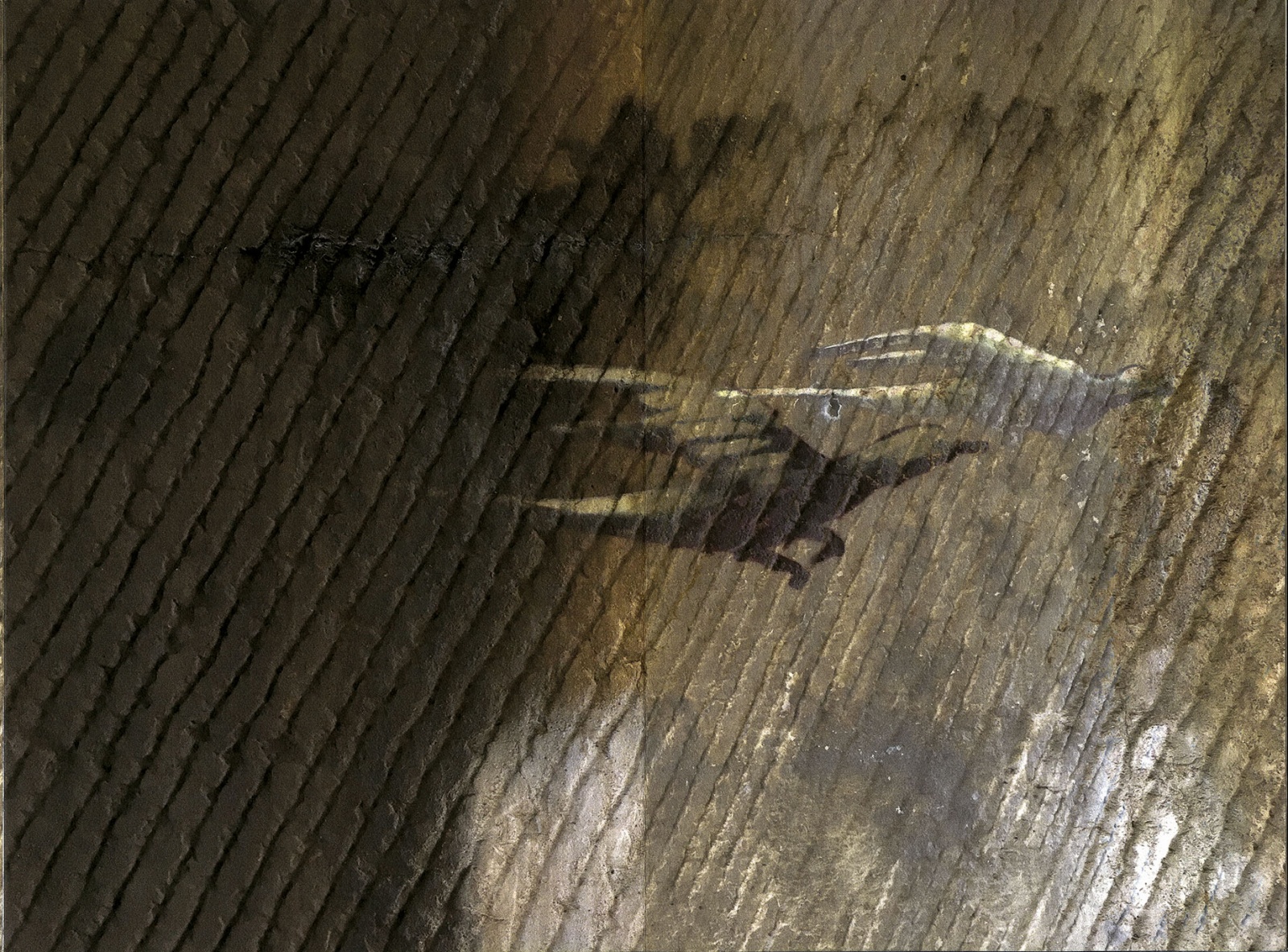 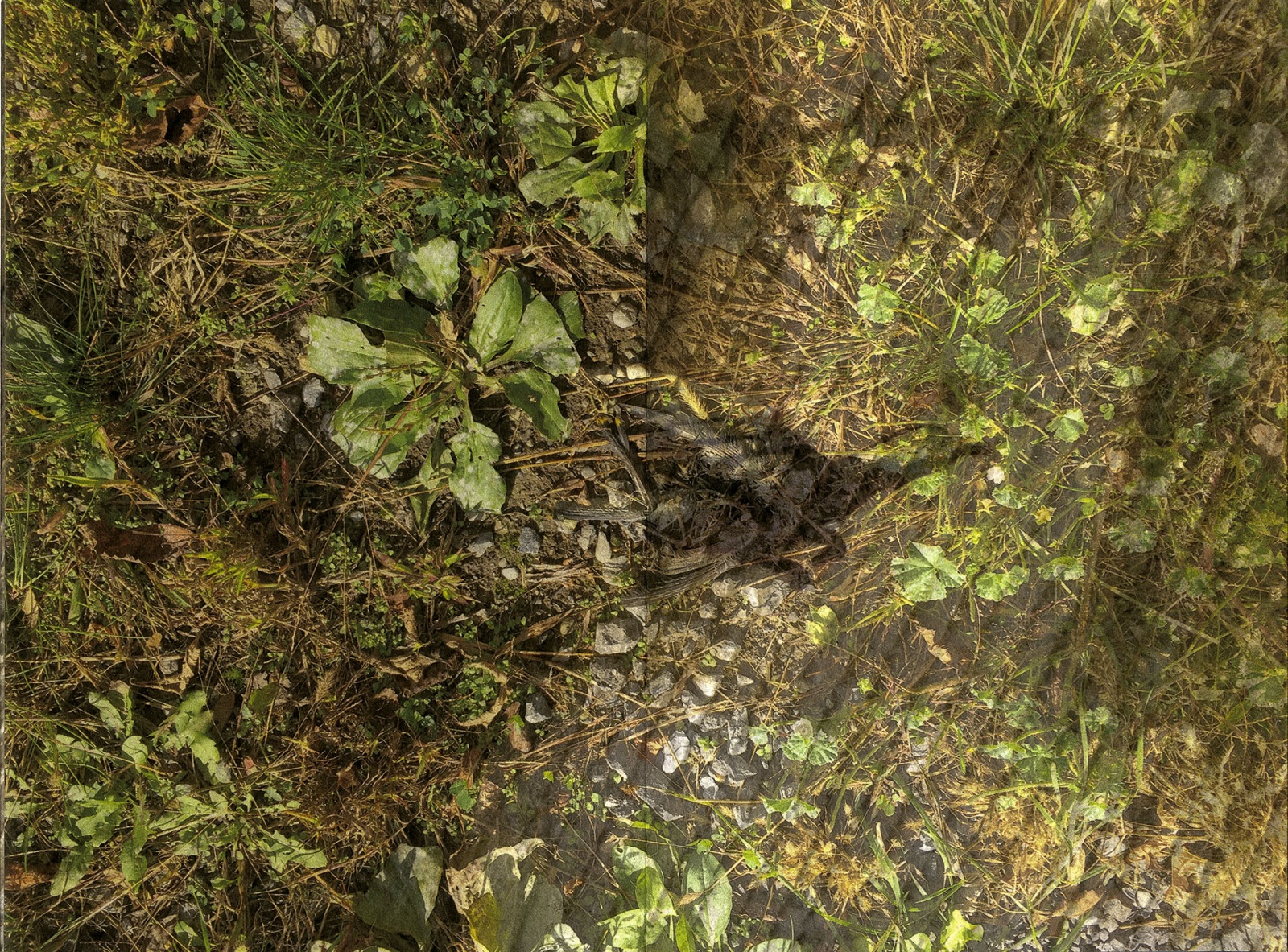 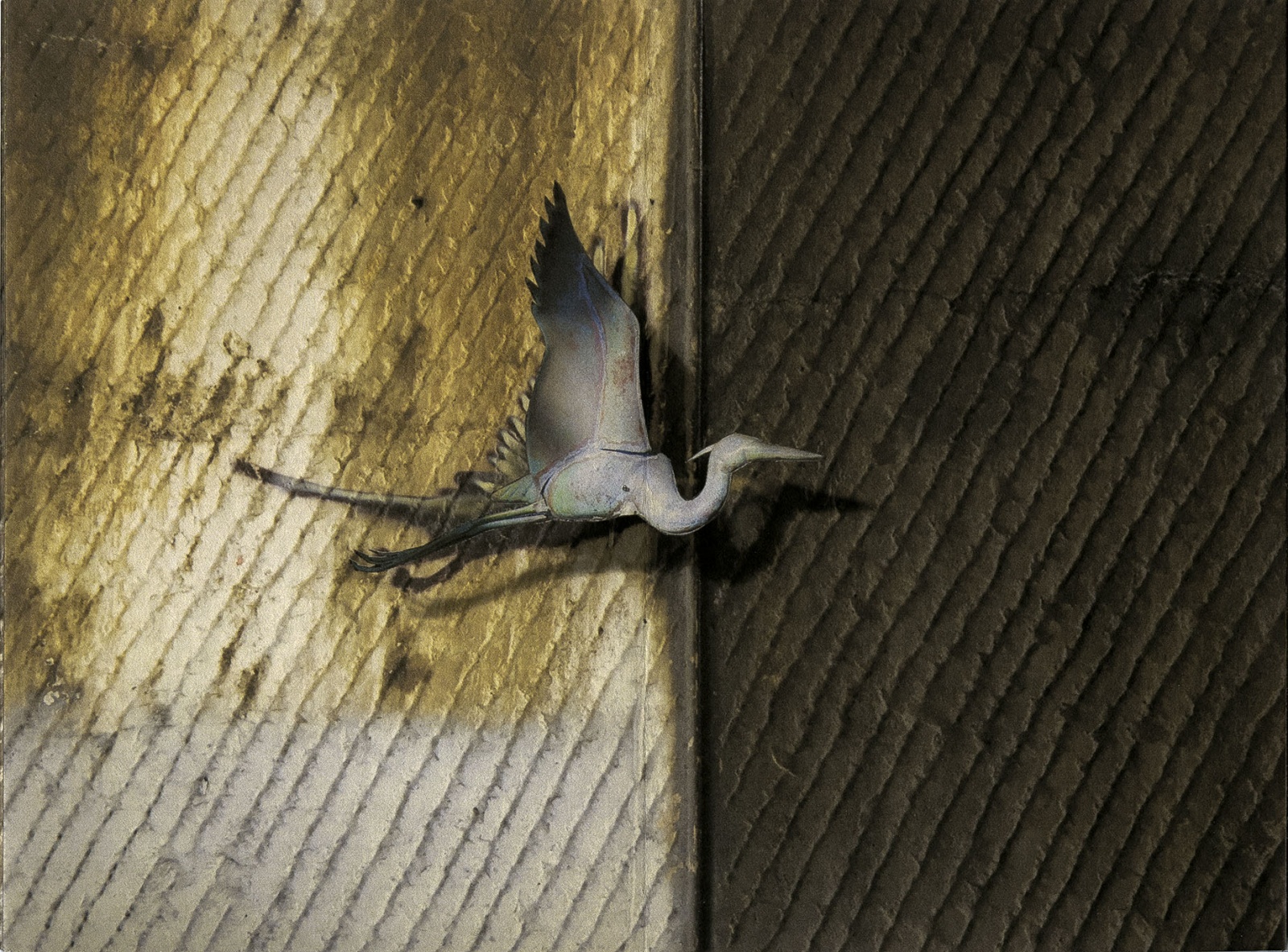 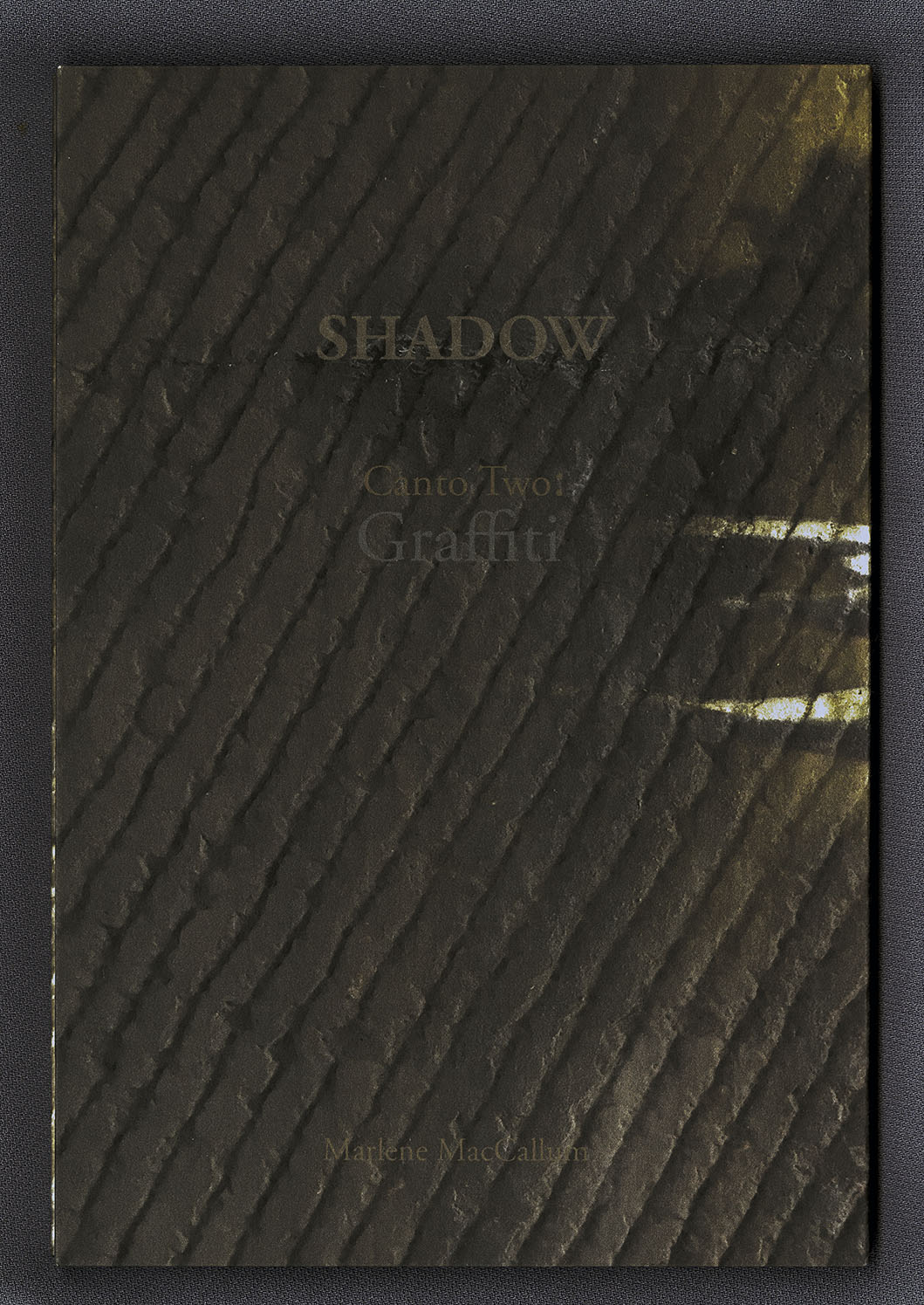 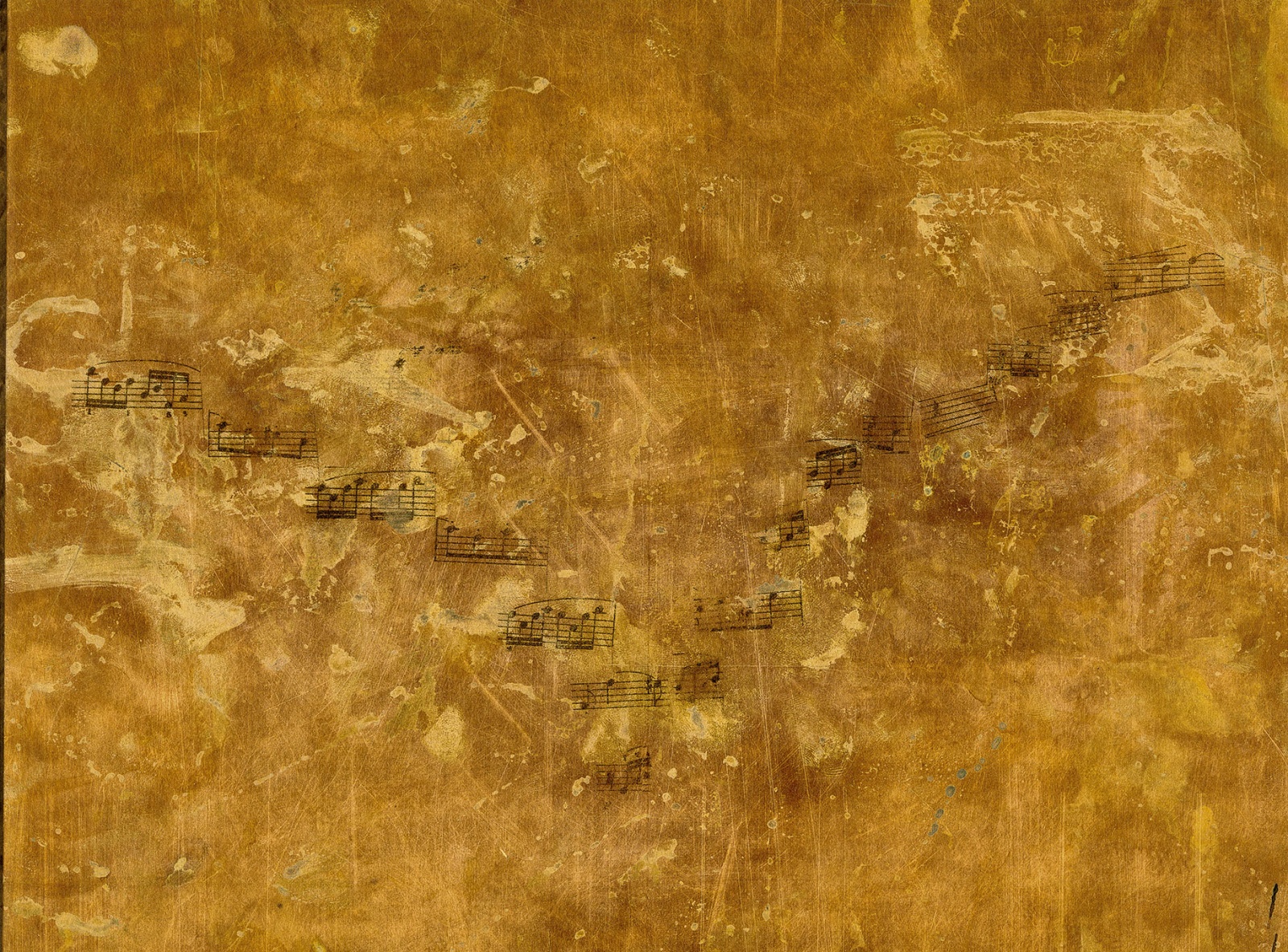 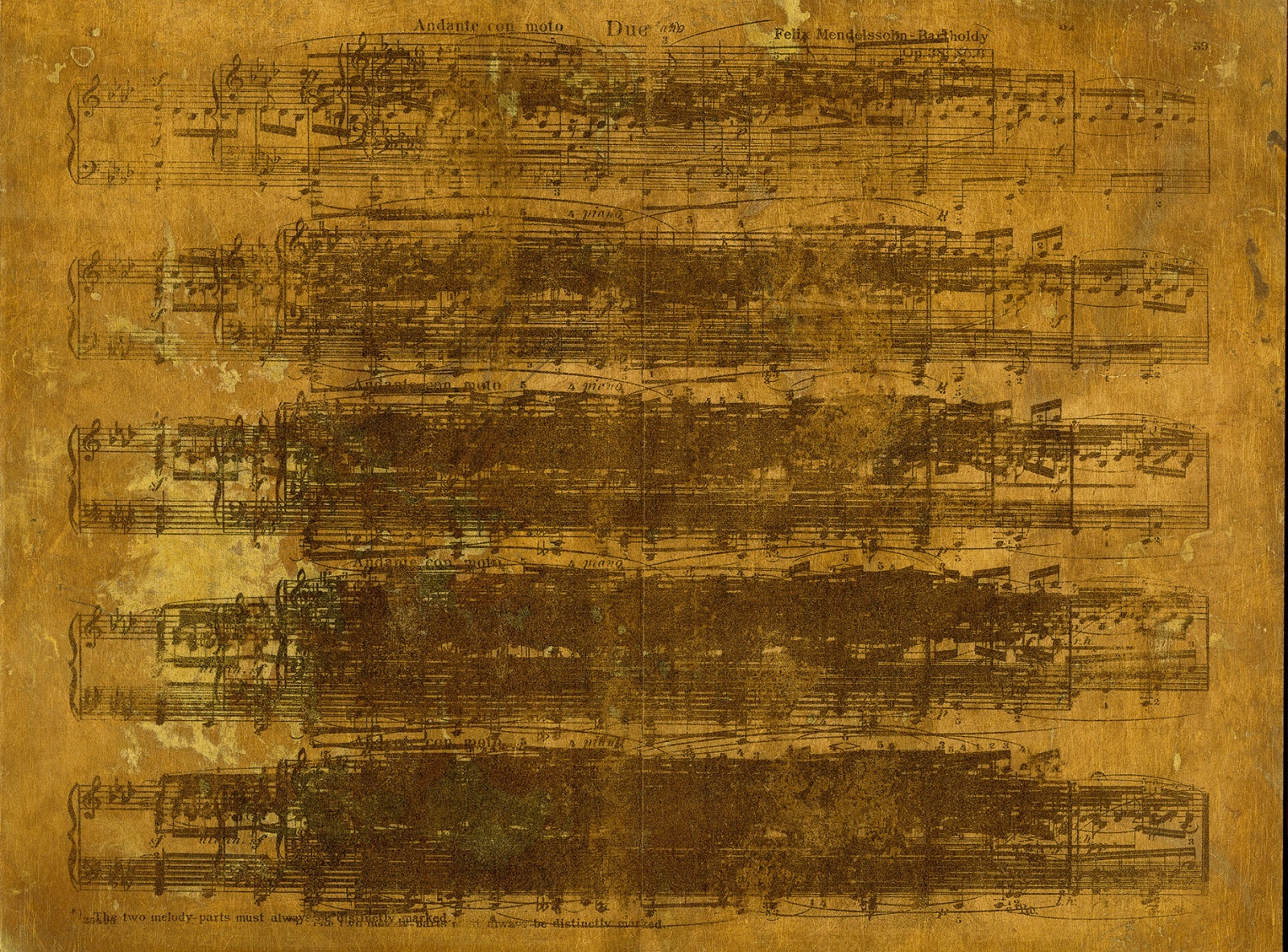 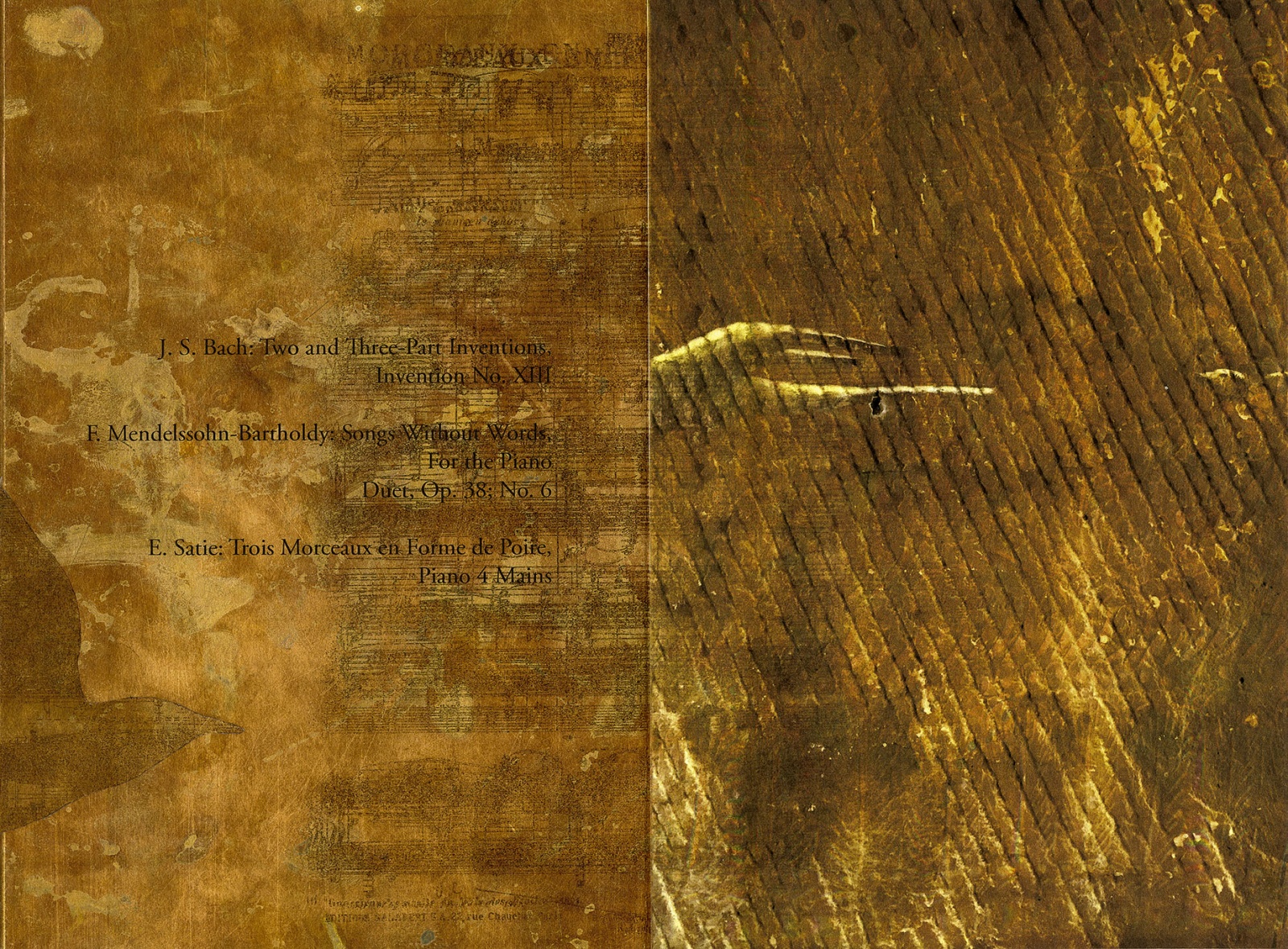 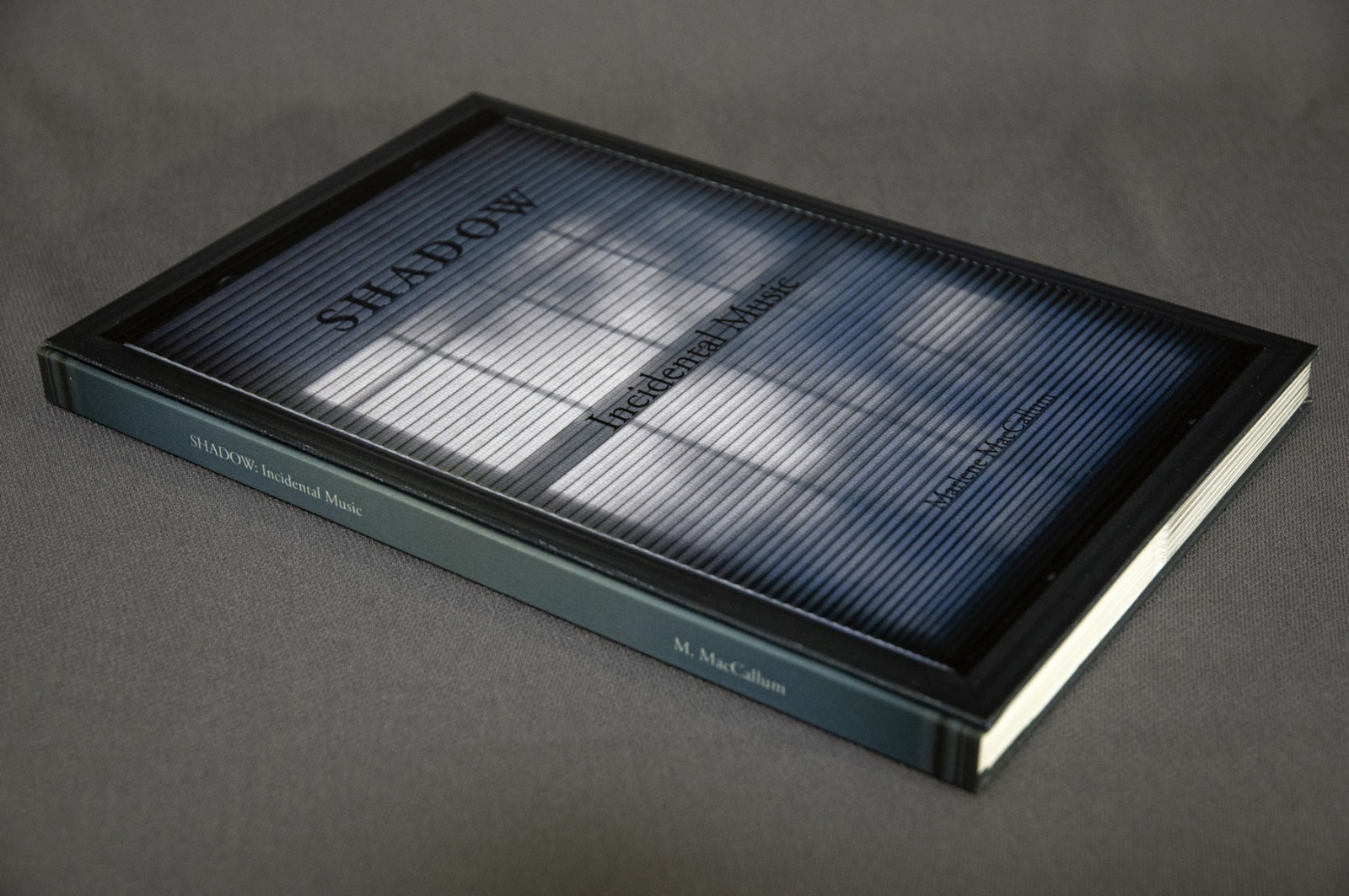 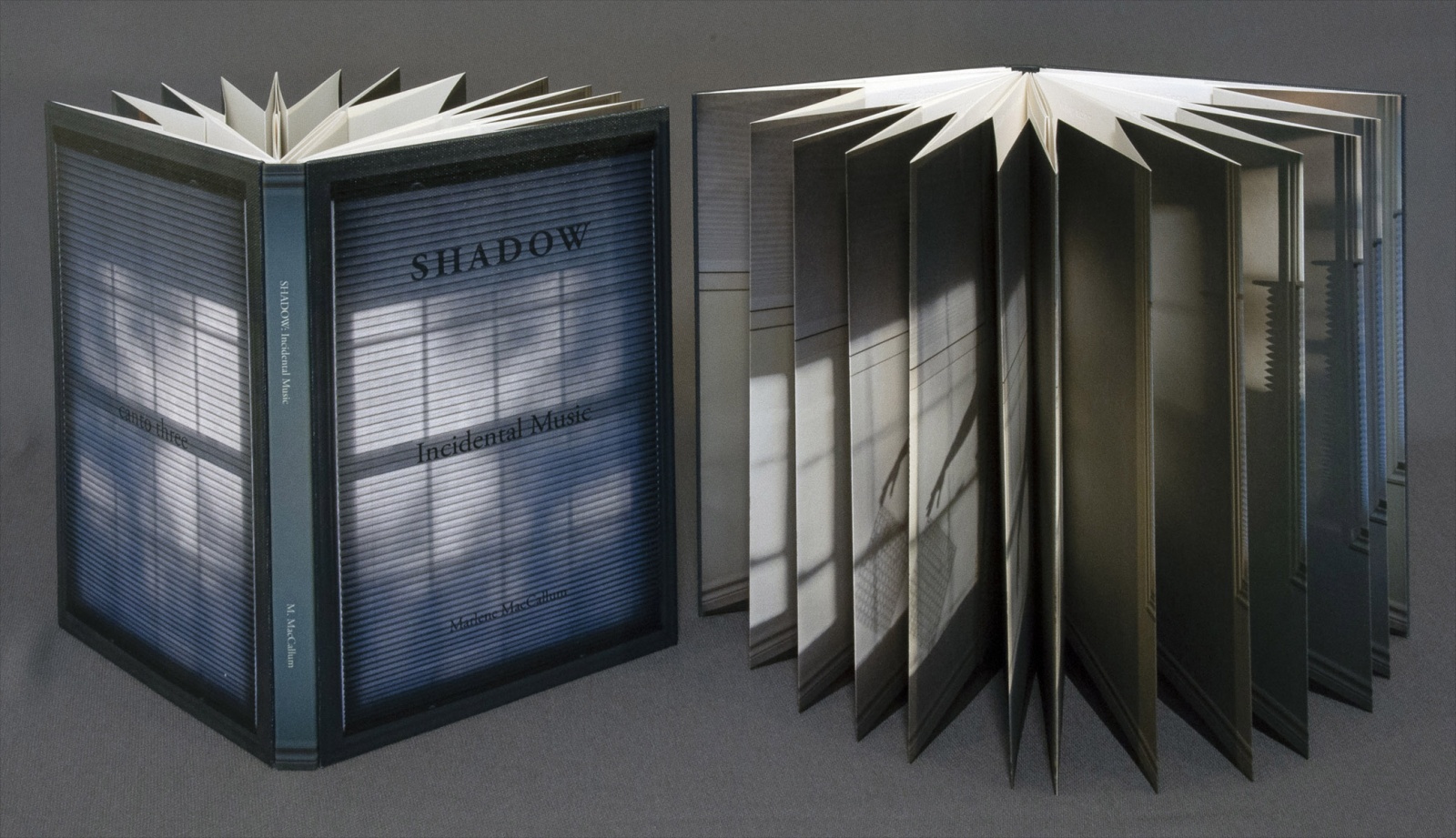 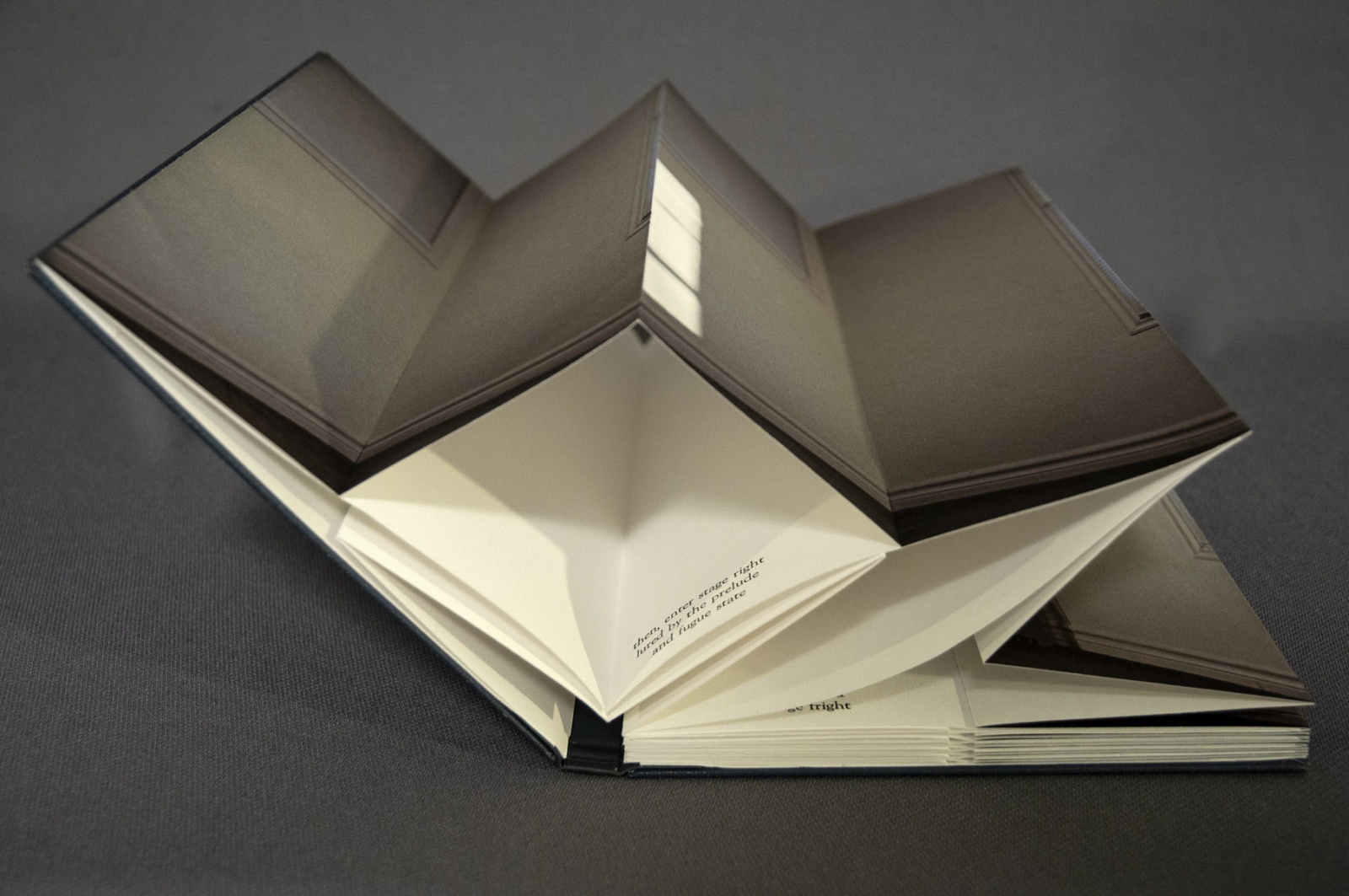 Shadow: Incidental Music, 2019. Detail of the image accordion suspended above the poem accordion. 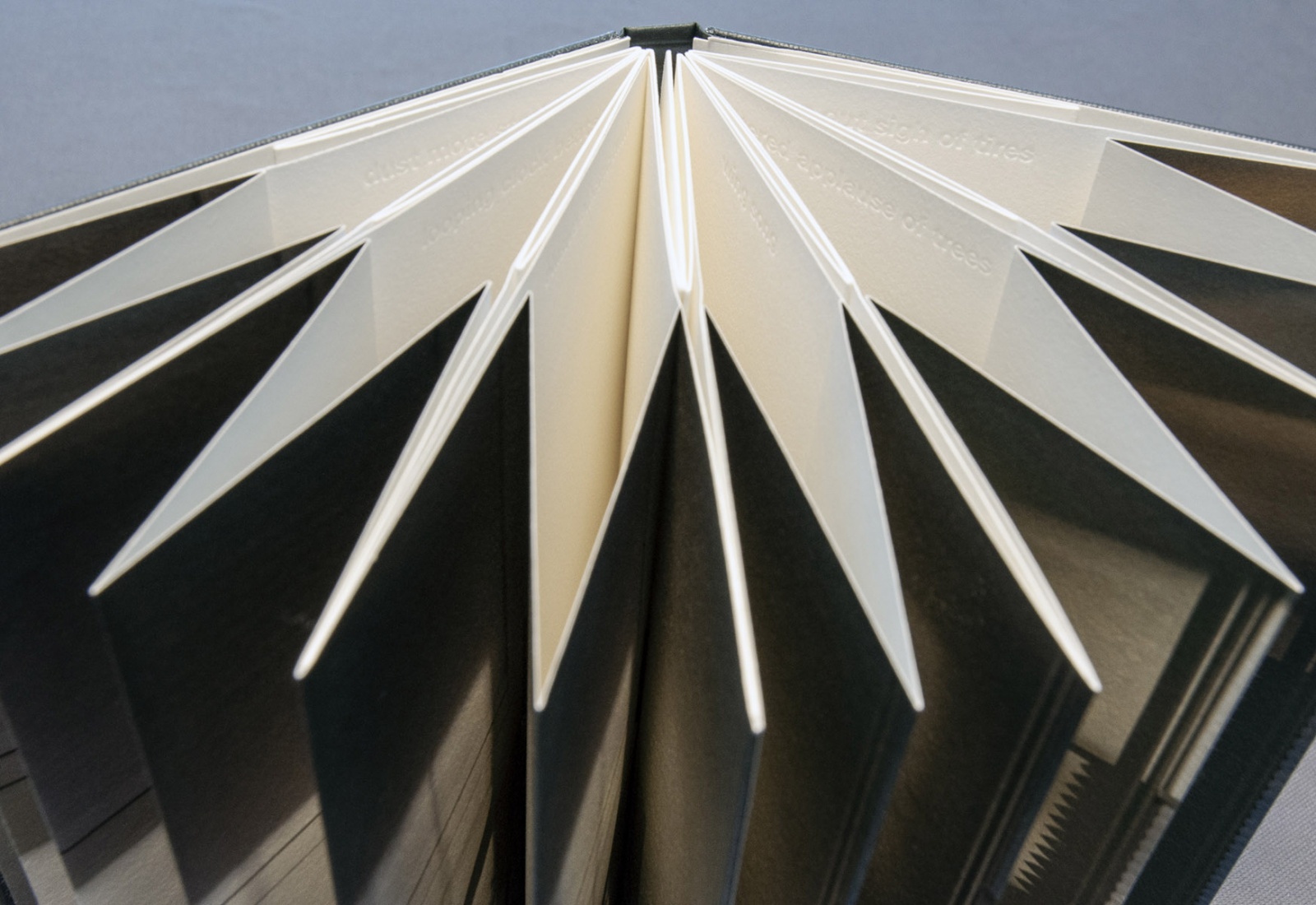 Shadow: Incidental Music, 2019. Expanded view of first half of the images.

Shadow: Incidental Music, 2019. Expanded view of the second half of the images. 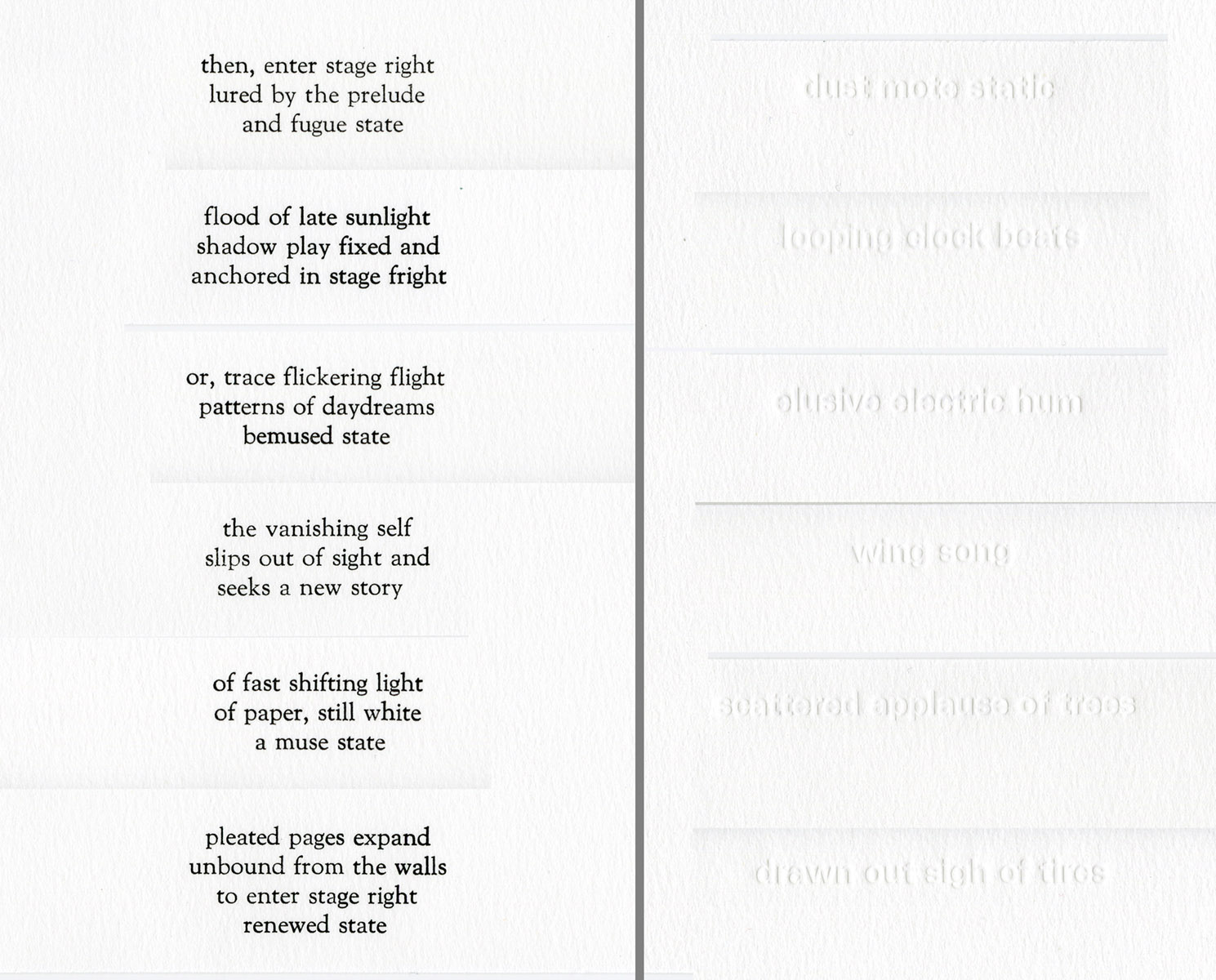 Shadow is an ongoing artist’s book project that brings a new approach to my long standing interest in domestic and private spaces. My previous work in Newfoundland centered on interpretations of my specific experience of my ninety year-old home and the broader cultural phenomena of living in a mill town housing development. I have recently relocated to a new home in rural Ontario. My interest has shifted to the potential for built structures to have both literal and metaphoric implications in regards to themes of absence and presence. Events within and around physical spaces occur on an objective level but our subjective internalizing is the basis for our perceptions; forming the memory and ensuing narrative. Naturally occurring patterns of light and shadow create cyclical but transient intrusions into interior spaces. This simultaneity of internal and external realities has led to a focus on physical and psychological thresholds. In order to encourage an open-ended evolution of the body of work, I am using the convention of the long poem to create a series of visual artist’s books. This provides the opportunity to create discrete pieces, or cantos, each which investigates a different aspect of the theme of the shadow.

The first canto, Still Life, began when a cedar waxwing flew into a picture window and died. Avian fatalities are far too common because of the excessive size of our picture windows. The emotional experience triggered a memory of the first canto from Vladimir Nabokov’s Pale Fire, “I was the shadow of the waxwing slain by the false azure in the windowpane…” and the fictitious poet then proceeds to create imagery of the viewer seeing reflections and doublings of the interior and exterior spaces. Building on this literary source, my visual recording of the incident evolved into both an elegy and a musing on the nature of stilled lives. The cover of Still Life is a close-up view of a window screen and distant blurred trees. The title page brings the trees into focus and reveals a reflected window hovering within the branches. The next pair of images turns the viewer inwards to face the projection of the window light and trees shadows playing on the wall. The following page spreads pair still life images. The waxwing is suspended above a layered version of Canto One from Pale Fire and is juxtaposed with a fallen weathervane in the form of a heron. The final spread presents, on the left, the same weathervane poised for flight within an interior space and, on the right, the image of the waxwing has been liberated and replaced with the view through the window. The brief text is written from the bird’s perspective. The sequence of images plays with formal and spatial qualities and the gatefold structure allows the viewer to create their own pairings. The experience of the piece is that of moving through the interior structure of the book while contemplating images of interiority and the nature of the “still life” and the stilled life. Making this work is part of my process of reconciling the reality that my home is my shelter but has negative impact on the surrounding wildlife.

Graffiti is the second canto. These cantos have a subtitle that references undervalued art forms or genre, reflecting my personal politic of attending to the overlooked and dismissed aspects of our daily lives. Graffiti began with the discovery of a serial graffiti piece in an underpass in Rochester, NY. I was fascinated by the representation of a creature in flight locked into a static wall. Using these photographs as a starting point, one side of the book is a series of layered images. Overlays of the graffiti images were elaborated upon by the inclusion of a desiccated bird corpse. The final spread re-introduces the heron from the previous canto as a cut-out pinned over the graffiti image. This creates a trompe l’oeil effect and also frees the bird from the wall. The accordion structure allows two readings. The spreads can be experienced as individual images or the piece can be expanded and create a pseudo animation. The paper support becomes the architectural element, acting as the wall. While layering the images of the graffiti and actual birds, I was struck by the counterpoint of the images. This introduced a musical component to the piece. I studied piano and still play but am unable to perform due to paralyzing stage fright. In response to the interplay of images, I selected three piano pieces where the musical voices interact in a way that felt relevant. I scanned the musical notation and then reworked each piece into a single representation reflective of the piece. These images were then printed out and transferred onto copper, creating a visual record or performance. In this way, a form that is normally extended over time was collapsed into a singular presentation. Each side of Graffiti is a visual record of a fleeting instant; birds fly by, the murmur of musical notes fades away.

Incidental Music is the third canto of the ongoing project Shadow, a book work variation on the long poem format. Incidental Music, presents itself initially as a straightforward codex but upon opening reveals a suspension of nested accordion-fold structures. Naturally occurring patterns of light and shadow create cyclical but transient intrusions into interior spaces. Sunlight progresses through the time and space of the pages with a brief shadow-play balancing-act performed mid-way through. The images hover over and almost obscure the poem and soundscape components quietly awaiting detection within the folds below. The poem rests within the base of the text accordion. It is a variation on the villanelle and cycles through psychological states. The blind embossed soundscape floats within the uppermost folds. It evokes subtle movements in a space so quiet that you can hear the most minute sound. Each component of the piece -- image, poems, cascading folded structures -- exists independently and plays out its own rhythmic logic and integrity; a visual, poetic and material ostinati. The components complement each other by their shared manifestation of transitions. Incidental music bridges one scene to the next. In this piece, however, the interlude is the significant event; the condition of being the present. The past and future remain unknown.